I was really happy to hear that BB was partnering up with Disney this year – they’ve released a lot of Disney character sets which I will get through in later posts.

The Disney Princess ones are so pretty aren’t they? I’m happy they included Tiana from Princess and the Frog, which is also my favorite smacker from this set. There are some repeat flavors (Spun Sugar Shine) but for the most part they have unique or cutely named scents. 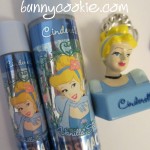