A smacker by any other name… 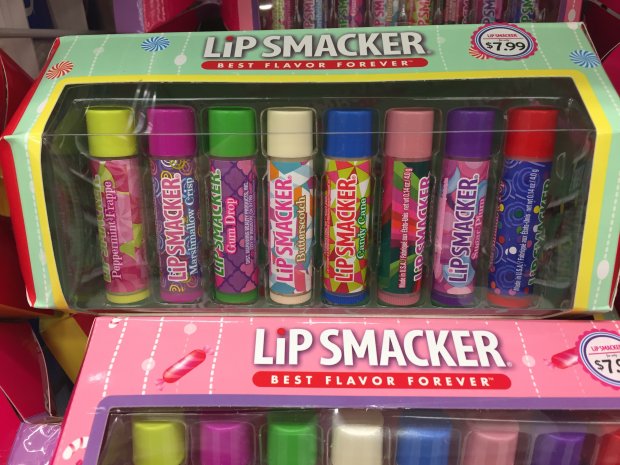 I’ve gotten a few emails from readers that say they aren’t getting exactly what’s pictured on the label – that is to say, some of the new holiday smackers appear to be re-wrapped old flavors:

“Wanted to send these photos along to you. Markwins is putting different variations of holiday flavors out. There are 3 different versions of the same Ribbon Candy. They are taking old flavors and putting a holiday wrap on them.”

“The flavors don’t even resemble or mimic the said name. It was pure laziness. Here’s the ones I got and what they really are;
Marshmallow Crisp is Confetti Sprinkles
Butterscotch is Vanilla Bean
Candy Cane is a cake of some sort, can’t put my finger on it
Ribbon Candy is Fresh Strawberry (same one I got in cane)
Marshmallow Pop is Strawberry Sprinkles

this variation would be an …interesting… surprise:

“Dulce de Leche is in disguise as Ribbon Candy too. The thing is is there are actually correct versions out there with the right formula of each holiday flavor but say someone who doesn’t know any better picks these up are going to be really thrown off that the flavor names do not match the scent AT ALL. “

“Hey Bunnycookie! I bought the new Christmas smackers and they’re not even the right flavors! My new Butterscotch is a very distinct Strawberry and Candy Cane is Angel Food Cake. My Marshmallow has no hint of that flavor either and it honestly seems like Vanilla Cake but I’m not 100% sure……”

“the new butterscotch Smacker is not butterscotch let’s put it that way! at least mine wasn’t, instead it was strawberry (shudder). please post about this! quality control is lacking since the transition. also so many of the other flavors are just butter mint re-named, i don’t know if that was intentional or not. i am so sad!”

Has anyone else experienced this? I’m curious how rampant this issue is. My guess is fairly common considering how many emails I’ve gotten so quickly from you guys.

I’ll be reaching out to Markwins & will update here if needed!

95 Thoughts on “A smacker by any other name…”